Let’s just admit it – the US (and the world) is witnessing a disappointing election campaign this time, probably the most scandalized one since 1884 in the history of the country. Sure, there is a lot of drama and controversies involved, but when it comes to the things that matter, there’s nothing significant to report. Political pundits and publishing giants have been very critical of the 2016 Presidential Campaign and the manner in which both the nominees are handling it.

While most of my thoughts revolve around the projects that I and my team handles on a daily basis, it’s hard to stay aloof and quiet on the US Presidential Election 2016 with the voting day closing in. The more I thought about the campaign – the speeches, the rallies and the debates – the more intrigued I got. Every news piece, video, interview and op-ed is highly polarizing, hard-edged and non-accommodating.

So, is all hope lost, for this election and for the future of the nation? I certainly don’t think so. Although apolitical, I am a strong supporter of UXify-ing things, in digital world and in real-life. I could not, hence, help but wonder and ponder over some of the ways Presidential candidates can be evaluated over the defining principles of UX design.

From how I see it, in the system of democracy, the voters become the users. As a chosen President, Mr. Donald Trump or Mrs. Hillary Clinton would become the product. And how they choose to approach multifarious issues concerning the nation, is to be decided by the election campaign designed by their respective teams. These individual approaches, hence, can be considered as the UX approach deployed by the candidates.

As the designers of the foreseeable future of the nation, there are certain aspects of a highly functional UX design that these presidential candidates should consider –

Experience design is not just about a product anymore. It goes deep under and beyond the scope of interaction between the product and the user, and covers all low-downs and high-ups of the entire process, from the buyer’s journey to the usage to the support to the reviews and general feedback.

Moving away from the digital world of apps and software products, an all-inclusive, holistic approach is also applicable to the UX design of real-life products, services, and scenarios.

Clinton has done a decent job in addressing all issues of national importance viz. health, education, LGBTQ rights, housing, medicare, climate change, and gun violence prevention among others, even if just on the surface. Sadly, the same can’t be said of Trump. With a 10-point action plan that focuses more on the exclusion of a selective group of voters, along with the creation of a more rigid, constrictive environment. If he gets elected, that is. For those who forgot his campaign launch, he’s still hell-bent on building a wall between America and Mexico, and ensure that Mexico will pay for it. Building an entire campaign around demarcating the various groups of citizens (take a cue: African Americans, Latin Americans, etc.), as well as alienating foreign ties is not only polarizing but also creates distrust among the users (voters). 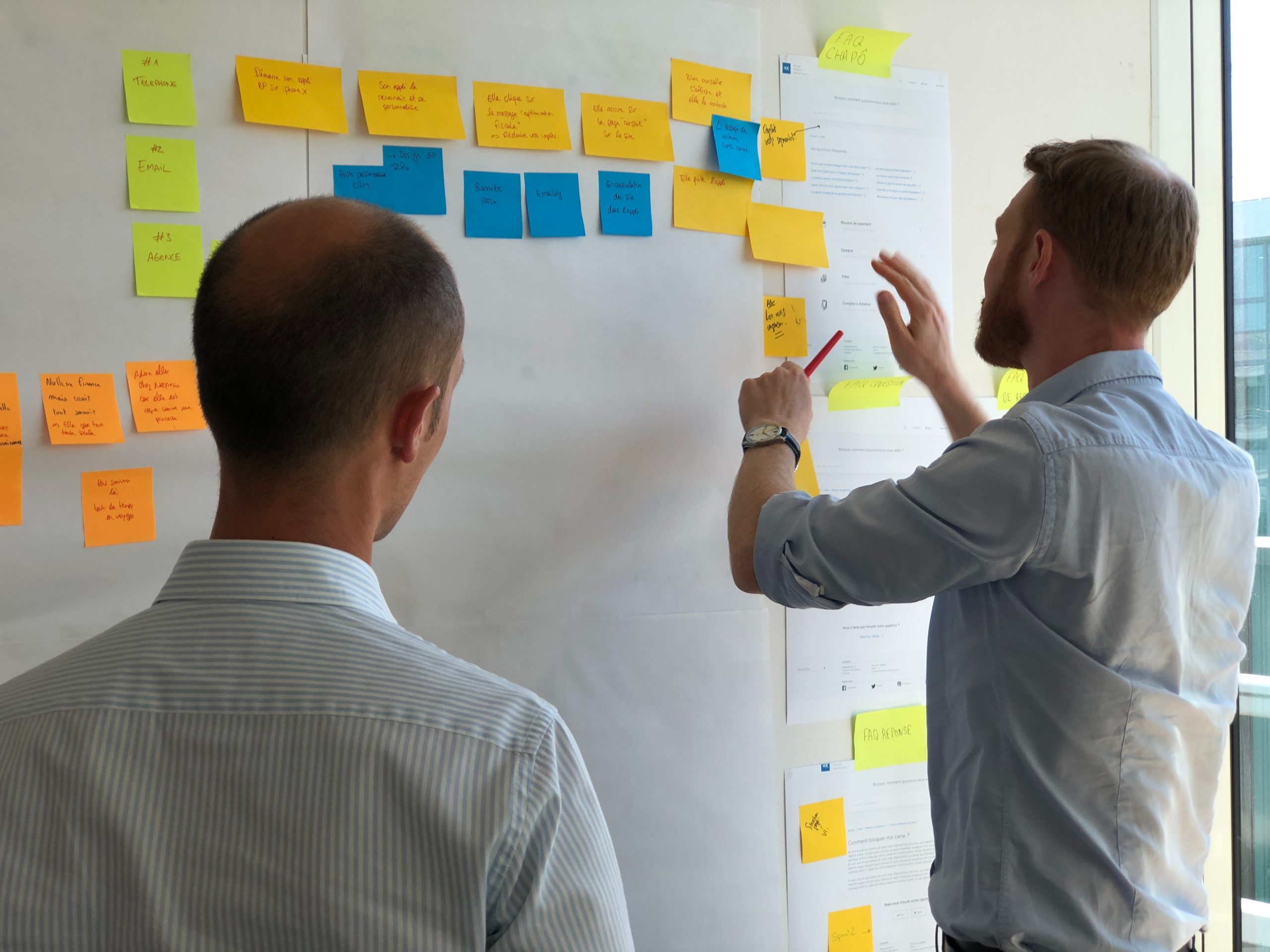 Understanding user psychology is one of the primary actionable steps when you talk about UX. The product that understands and serves the users better emerges out as a winner.

While we are sure that both Trump Campaign and Clinton Campaign have conducted voter research(es) and have crafted their strategy according to their observations and conclusions, it’s also important to consider the psychological approach they have deployed to woo the voters.

Trump is (in)famous for using the psychology of fear. He eggs you down till you give in to the deeper, darker fears of your mind. Once, Trump said at a rally, “You’re going to have more World Trade Centers. It’s going to get worse and worse, folks.” He doesn’t speak the language of the masses. He does not try to understand that language either. He speaks only to a select few (white, rich, male Americans – to be precise).

Clinton, on the other hand, is a typical example of ‘people-pleaser’ personality. She cited an incident where an actor makes fun of her in the movie “Breach”, saying, “We don’t need anymore women in pants like Hillary Clinton.” The movie was being played by her air-borne staff, and when everyone laughed at the said dialogue, she laughed along too. Laughing on self is a good trait. For a presidential candidate, making light of a misogynistic remark that degrades her and subsequently, women who wear pant-suits, is no laughing matter. For a candidate that rose to this candidature rightfully, by having strong opinions, this soft, self-deprecating attitude is quite disappointing.

In the long run, neither of the approaches work for the benefit of any of the parties involved
– the candidates, the voters, and the nation.

Especially, when the president Obama has set a high bar with his positive and firm approach. During his two-term presidency, Obama has created a culture that thrives and prides itself on can-do attitude. He has led his citizens by words and actions, instilling a sense of passion, unity and identity. It would be nice if Trump and Clinton can partially borrow their temperament from Obama.

All good UX designers know and concur – It’s not enough to create a great product unless you create a need for it. There has to be a sense of clarity and a context for the user to use the product you so carefully crafted. The more direct and simple the solution it offers, the more successful it would be.

I get it – that sly, sheepish smile you have on your face right now. Trump has garnered much attention in traditional media and Twitter verse with his lack of clarity and context. I wish we could pass it off as a deflection technique. At any rate, mentioning Bill Clinton and ISIS while answering about his leaked tape on sexual assault and bragging about it, isn’t a wise move for a presidential candidate. Thankfully, I still run clear on Clinton when it comes to clarity and context. Her approach might not come off as strongly as it ideally should, but at least she doesn’t lose focus.

Flexibility and efficiency of a product are defining parameters of its UX design. The product must have accurate, fast and functional features, as per the user requirement. At the same time, it needs to be flexible and simple enough to accommodate both experienced as well as inexperienced users. The product should have customization options for users wherever needed, apart from user guides, accelerators, and help documents to assist the users. In simpler words, the product should adapt to the users’ needs; not the other way around.

This is also the most differentiating factor for our two presidential candidates. While Trump is the personification of rigidity, Clinton is flexible in her approach. A six-week paid maternity leave plan, proposed by Trump might seem lucrative. But at the same time, it enforces a rigid, patronizing attitude by the exclusion of men. Comparatively, Clinton offers more flexibility and comfort with her 12-week paid family and medical leave. Efficiency, however, is a debatable matter.

Clinton has been actively involved in politics and has held an important position in the Government previously. She has succeeded on some occasions, and she has failed on some. Trump has proven himself to be a tactful businessman. Whether he can use the same ideas to run a government, as he had run his businesses, is subject to apprehension and consideration.

You cannot expect a product to be successful if it is erroneous – UX doesn’t get simpler than that.

And here’s where both our candidates fail. Miserably so.
There’s a slew of allegations building up against Trump as well as Clinton. The allegations against Trump ranges from sexual assault to tax evasion to racial discrimination to overall misogynistic and intimidating behavior. Clinton, similarly, faces serious allegations like file-gate to email-gate to white-water and Benghazi operations.

Perhaps, this is where all our concerns rise from – both the presidential candidates have charges building up against them, which can land them behind the bars.

But, as we said earlier, there’s still hope…

A defining element of successful products is the extent of freedom and control it offers to its users. At any point of time, a user must feel in control of the software, app or the website he/she is using. The user must also have the freedom to share information, navigate or exit at will. Adequate guidelines and support at all levels of a user journey guarantee a successful product.

During the election, the only freedom (and responsibility) of a voter is to vote. The only control they have over the US Presidential Campaign 2016 is to vote and choose wisely to make the more deserving candidate win.